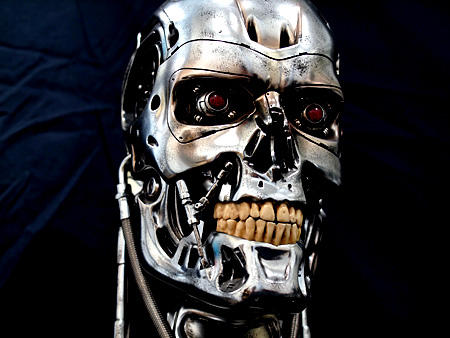 Some busts have stained effects and are being sold as “battle damaged combat distressed” or “combat version”.

But it is simply just applying paint to mimic stainsthe scorched look, and quality-wise does not meet expectations to be called “battle damaged combat distressed”. It’s probably because they are manufactured on an assembly line in China and where they just slap paint sloppily onto it. Most character toys and figurines are made in China. The workmanship seem to have improved over the years, but unlike other anime characters where you can just apply paint following a manual, the “battle damagecombat distress” paint on an Endoskeleton requires a certain degree of skill. It is not something you can just put on an assembly line and have it painted. Even more so on a life-size bust because the larger size makes it easier to find where you cut corners or where you lack skill. This is more an issue of the manufacturer’s philosophy about production than the workmanship of a factory itself, but at the same time it is understandable that there is a limit to how much hassle and cost you can put onto a product when you’re mass-producing in the hundreds or thousands. It would not make sense from a business standpoint to train someone to become highly skilled but only to sacrifice production efficiency. Above all, the workers on the assembly line, especially ladies who would have less interest in the Terminator than guys, don’t may not even know about the movie “Terminator”, let alone what this freaky metal skull is. I had a chance to tour a toy factory near Shanghai where they painted MLB figures. I asked the ladies who were working on the line if they knew what baseball was in the first place. Most of them shook their head. They must be wondering “what is this guy doing wearing a hat and gripping a stick?” That said, we cannot ask for a lot from these ladies to paint their products to a maniac’s satisfactory. There is no one to blame. 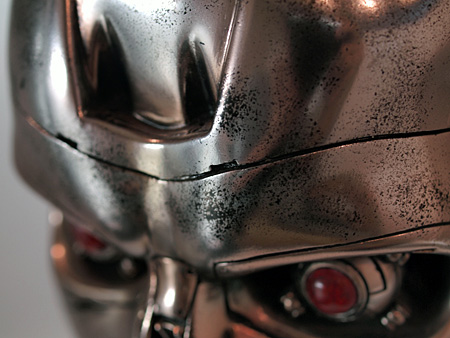 Stains probably applied with a brush 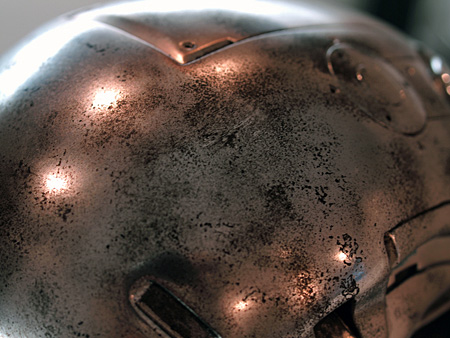 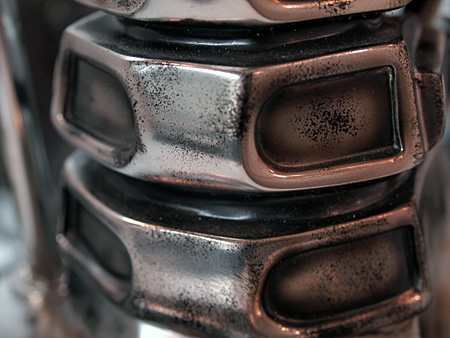 Stains probably applied with an airbrush. Only black is used.

The T-STUDIO Animatronic Bust ver. 1.1 is designed based on “the Endoskeleton that appears toward the last of T1.” At first I hesitated to apply paint to the surface of the beautifully chrome-plated Endoskull. Since a thin black paint will be sprayed entirely over the skull, the beautiful shine from the six layer chrome plate plating will be gone for good. But since the theme was set to be the Endoskull from T1, I had no choice but to do it.

Stan Winston says he referred to a motorcycle exhaust pipe to create the burnt scorched effect on the Endoskull. The effect of heat on a metal surface is expressed using multiple colors such as orange, yellow, blue, and purple. Based on pictures of the props and Winston’s statement, I carefully airbrushed clear yellow paint then clear orange. I used three different tones of orange. Most manufacturers only use black to create their “battle damagecombat distress”, but just by applying a yellow color, it makes the “damage” scorched-look look more real. You can try it out on your bust as well by applying clear paint. 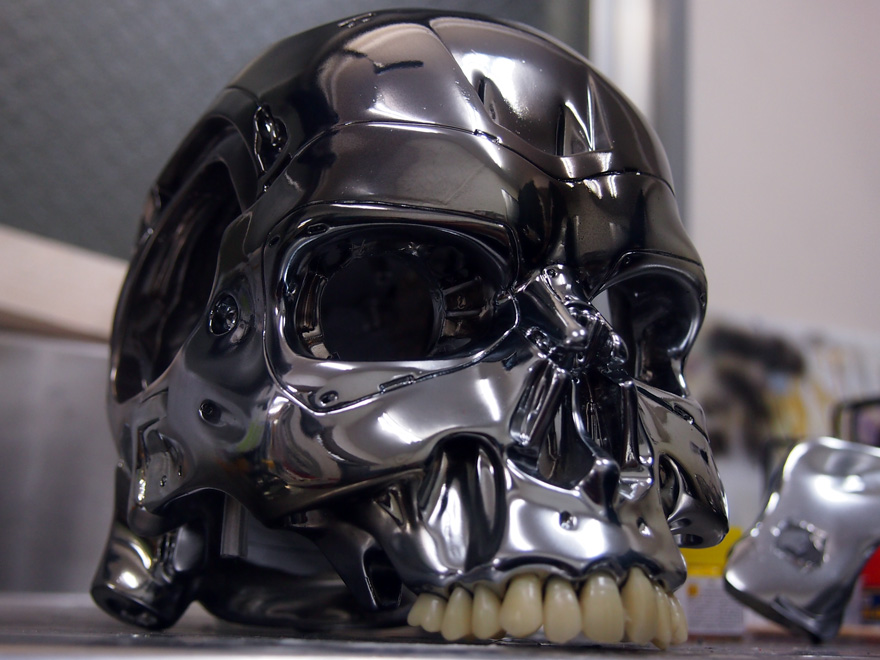 I have painted the Animatronic Bust ver. 1.1 carefully so it doesn’t look unnatural. 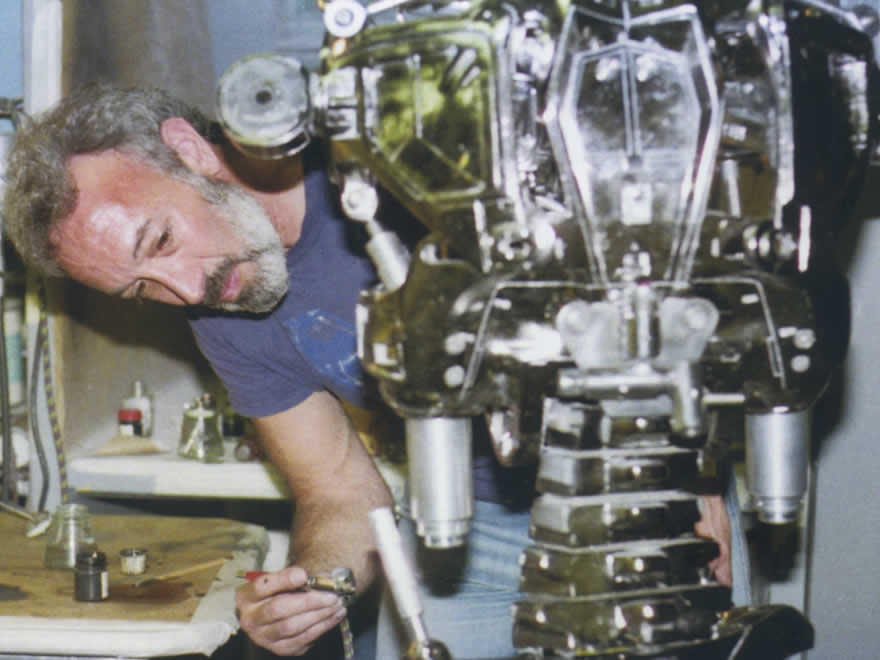 Past days of Stan Winston. He describes how he applied stains to the Endoskeleton. (from “The Winston Effect”) 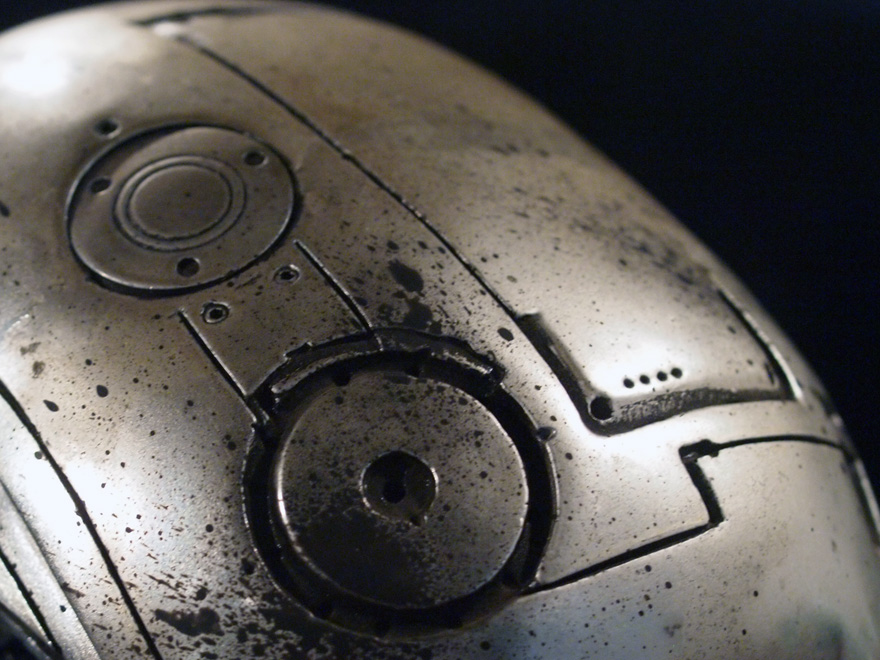 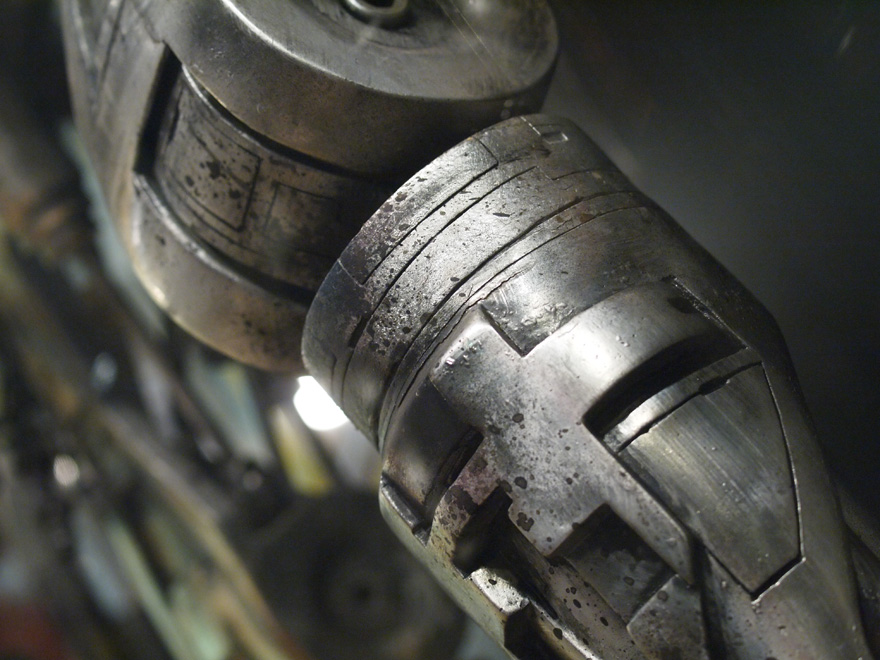 The above two pictures are that of a prop from the original movie showcased at the “Tomenosuke Shoten” store. In addition to the damage scorched effects applied at Stan Winston Studios, there are traces of actual wear and tear probably from the film shooting, and aging degradation since 1984, which adds to its “battle damagecombat distressed” character and the atmosphere that it creates. This cannot be easily copied. 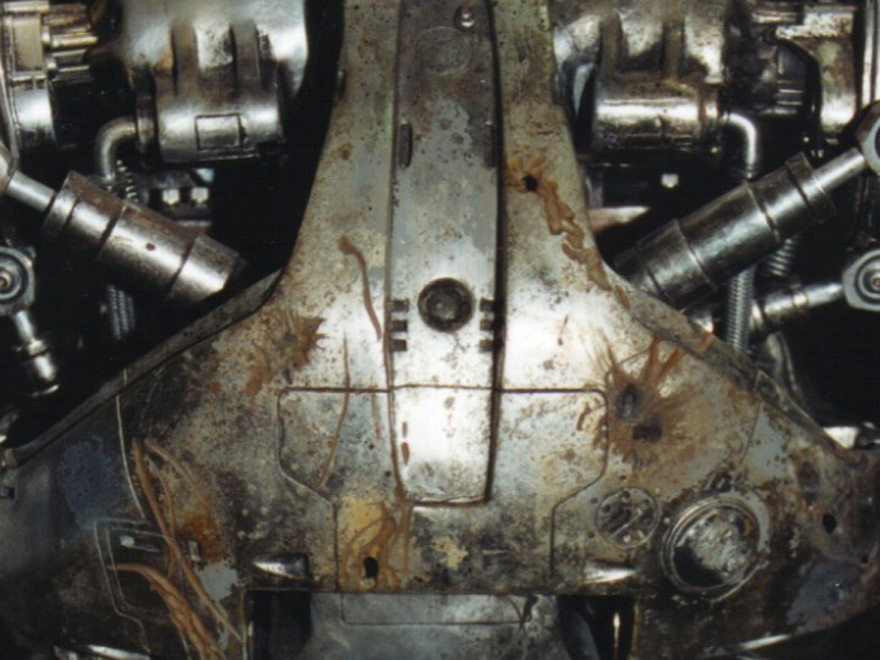 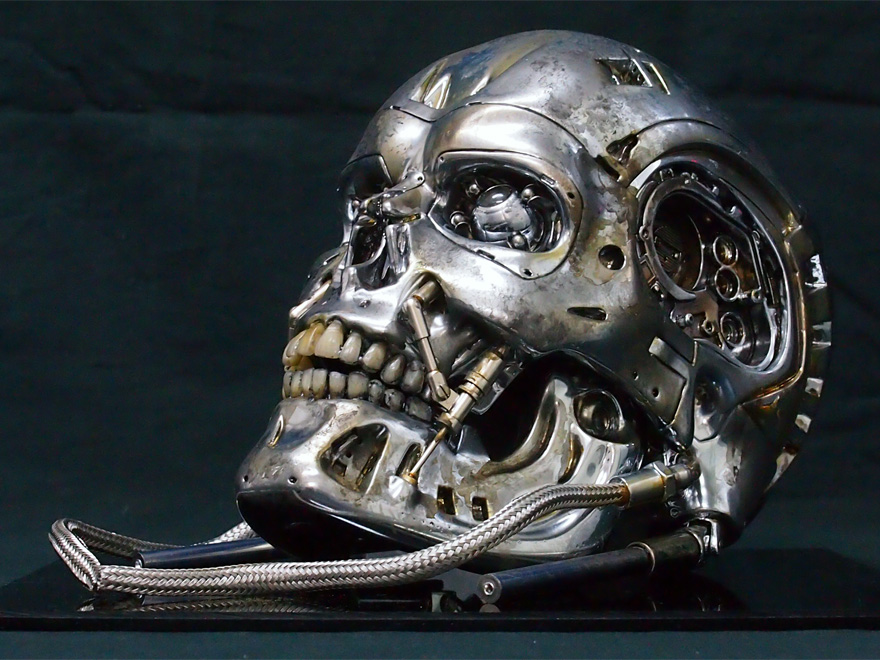