The “glowing red eyes” establishes a part of the identity of the Endoskeleton, and many related products support a mechanism that mimics this. This gimmick is so important to maniacs that in an auction for pre-owned models, the price would even drop down to half if it is broken. T-STUDIO’s Animatronic Bust also features this mechanism, but has gone a step further. It’s not just about “glowing”. As many fanatics have realized, the eyes glow differently between the first and second movies. And they’re even different within the first movie, based on the different props being used. 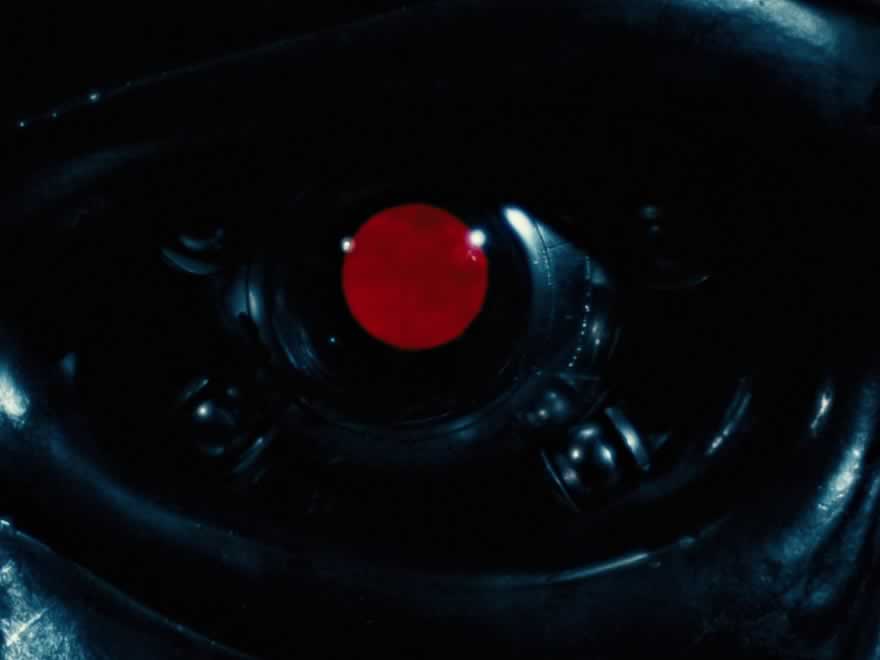 As mentioned in “#001: Eye movement”, this scene sequence is taken using a prop made a couple of times larger than life-size. There is a light source behind the iris, and the light seems to be inequable and mottled. 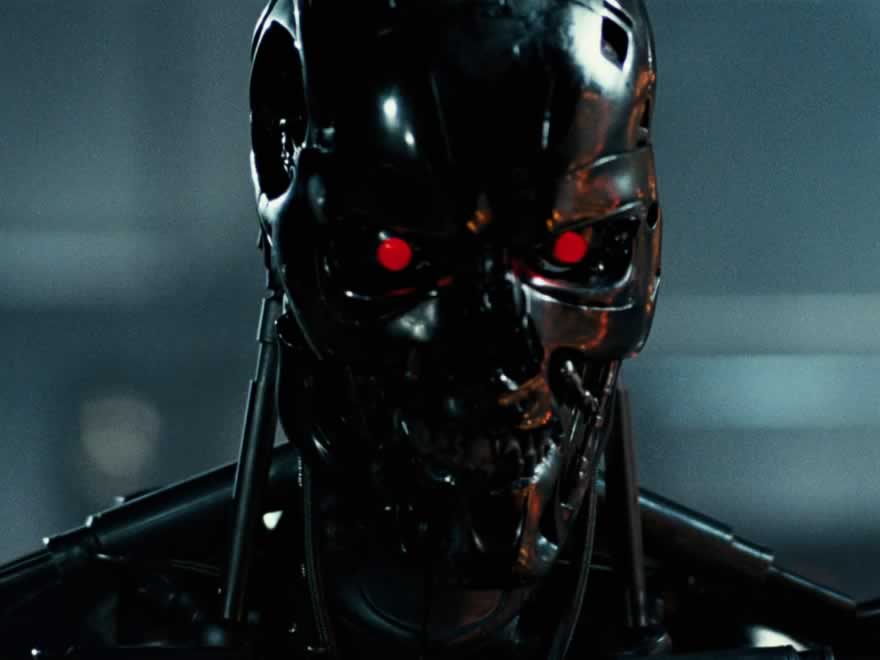 The skull of a life-size prop. The light from the eyes seem to be transmitted evenly. 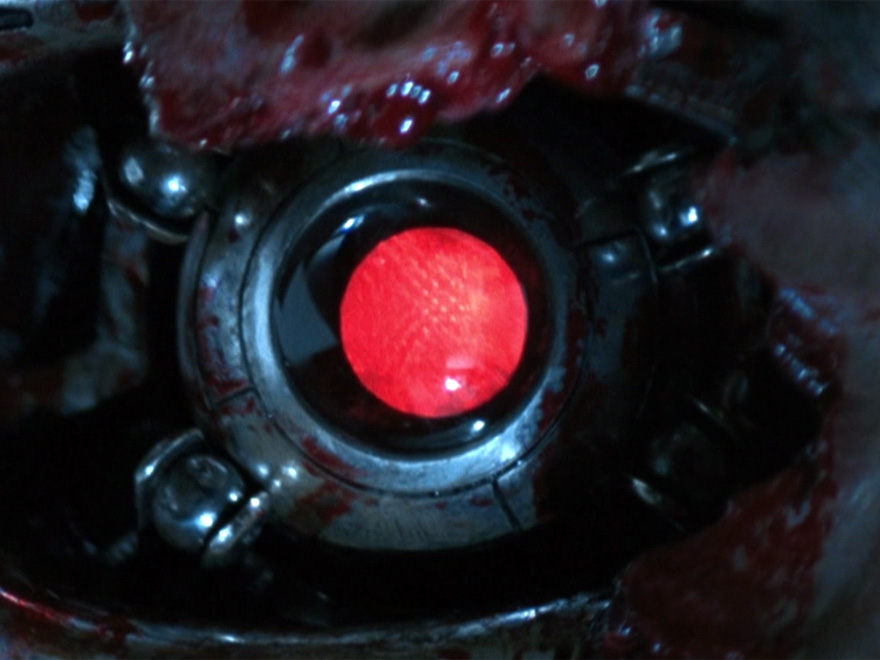 Towards the end of T2, where the T-800 reboots. This scene sequence was taken with an enlarged model similar to the original movie. You can see there is a pattern showing through the lens that resembles a reflector on a car. This assumingly comes from a cover they used to go over the LED used as a light source. (Image source: prop image from T2 Endoskull owned by Mr. Hirata, Kobe Japan) 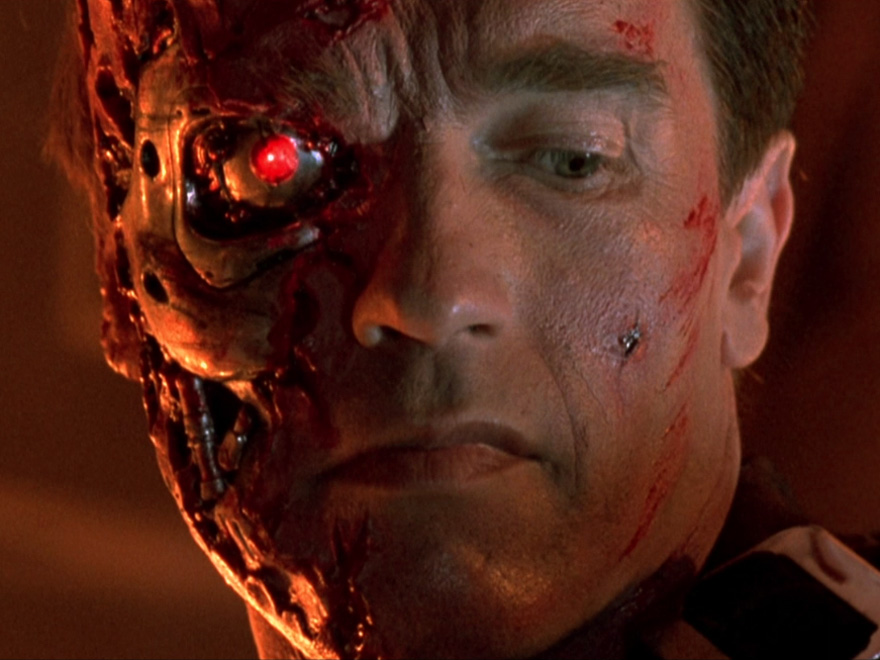 Scene Sequence where the face is partially destroyed. The eye used in Arnold’s special makeup seems to be using a small light bulb and not LED. 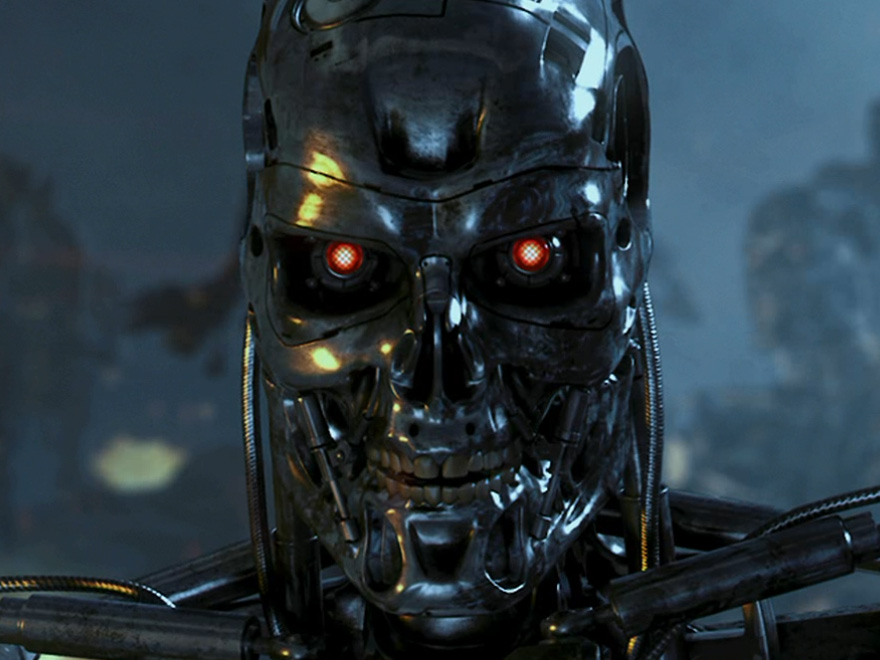 John’s nightmare at in the opening scene sequence from the third movie. The center of the eye is excessively bright because the LED light is not being diffused. 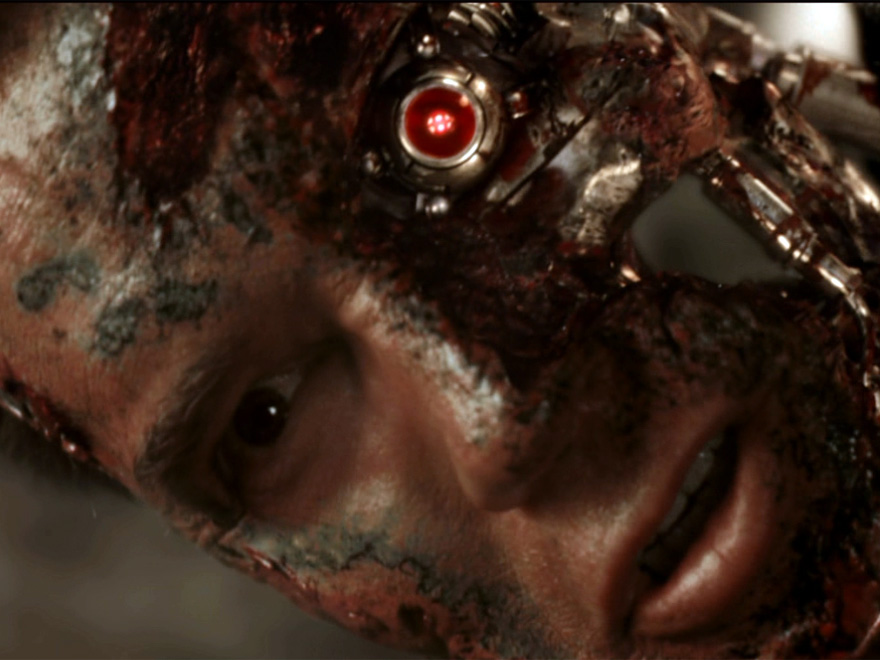 A close-up before the Terminator self-destructs itself towards the end of the movie. Probably no use discussing since there is a lot of CG being used.

As you can see, there are many different patterns on how the eyes glow. As I have stated in Defining “movie prop”, there is no single answer. Some people may not have realized the difference until reading this. Since my favorite scene sequence is the pursuit scene sequence in the factory towards the end of the original movie, I have adopted pattern 2 for the Animatronic Bust by T-STUDIO. In order to reproduce this glow pattern, I have come up with the method below after trial and error. 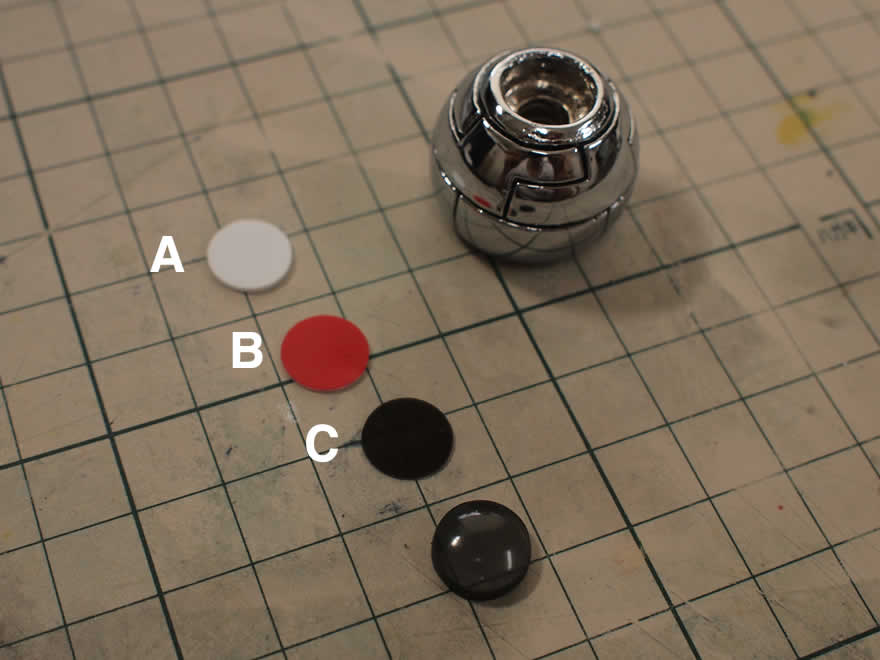 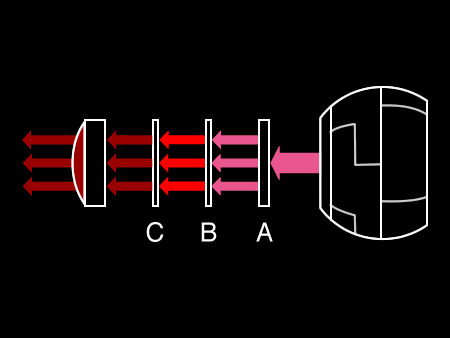 Diagram of how the panels function

Light from the red LED first reaches panel A (a 1.5mm thick plastic board cut round) and is diffused as it transmits through. The characteristics and weakness of LED light is it transmits in a linear beam, thus does not diffuse by itself. The A panel solves this issue (though actually it might be more accurate to say it “makes it look like it is solved” than saying that it actually solves the problem. When you actually look at it, it looks as though the light is diffused like pattern 2, but when you take a picture of it you will notice the center of the eye being brighter).

After transmitting through the A panel, the light next reaches panel B (a 0.5mm plastic board cut round with a red translucent film attached to it), given a stronger red color. The high-luminosity LED is red, but more like a pinkish red which is a turnoff. The Endoskeleton has to have those vivid, bright red eyes. The B panel does the job. Next, panel C (a translucent black acrylic panel cut round) plays an important role to make the eye look black when shut down, and only look red when booted, as I have explained in #002: Eye lens. Without panel C, panel B is visible through the lens, making the eye look red when shut down. The lens itself is a black translucent by adding some black pigment into a transparent resin, but you can still see the red color from panel B from certain angles. Panel C is to fix this.

The luminance naturally decreases by having these three panels in between the light source and lens, but since a high-luminosity LED is being used there are no issues with the brightness. Just like the lens color, if preferred, I can build a model using reflective parts to make it look like the eyes in T2 or later movies. 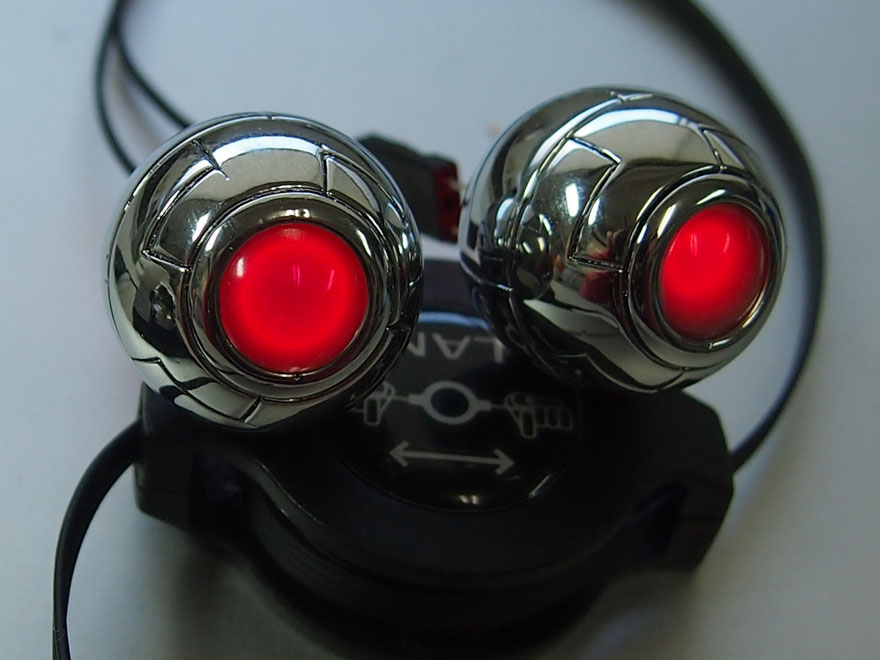 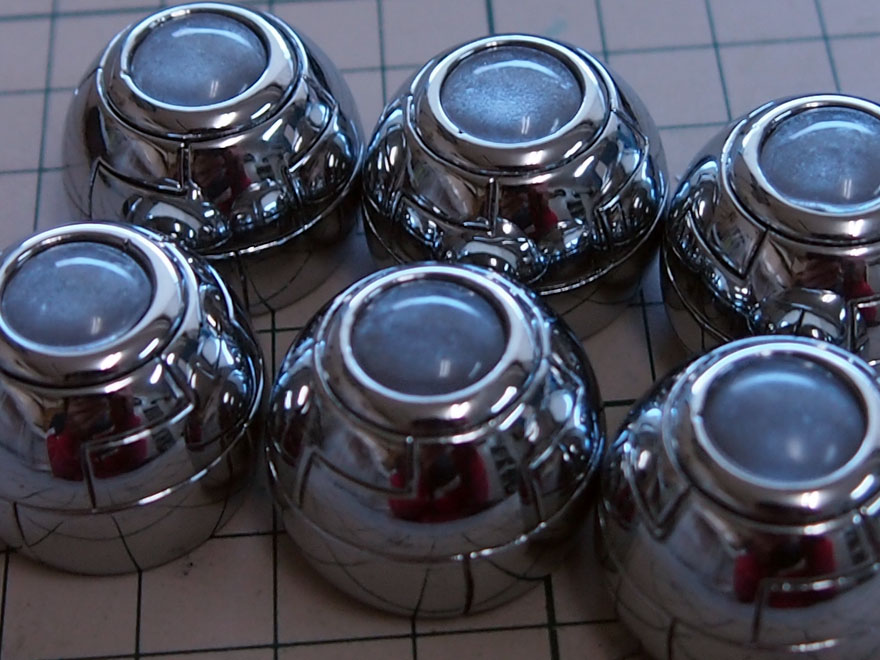