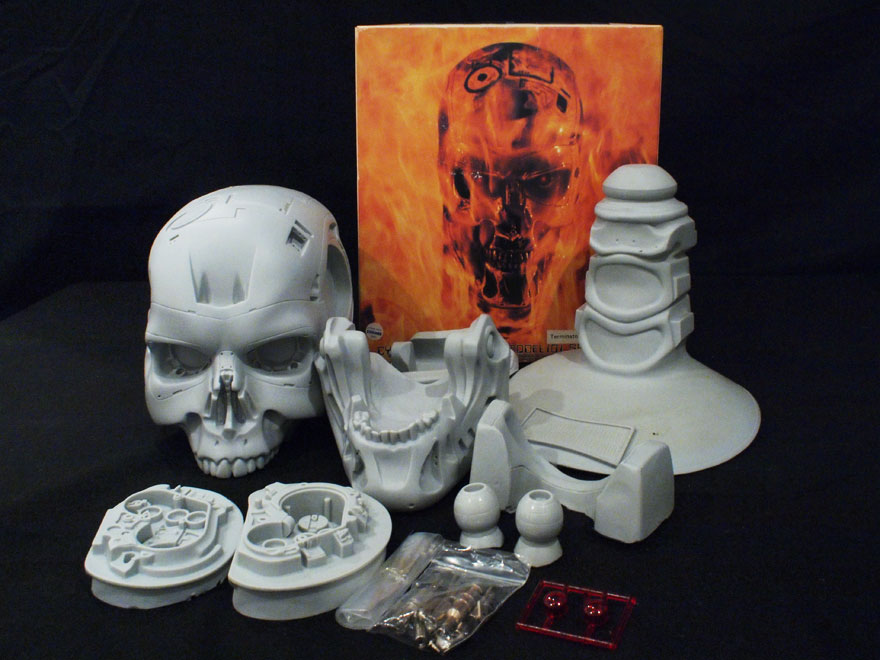 M1, located in the Fukushima Prefecture in Japan, is a leading manufacturer of creating figurines of heroes and monsters from special effect films. It’s notable that M1 has reproduced nostalgic replicas of soft vinyl toys that were sold 30 – 40 years ago, igniting frenzy among retro toy fanatics. Yuji Nishimura himself is an avid collector of classic toys, so it can be said that he understands fanatics’ taste buds more than anyone. That is why M1 products are accepted by so many maniacs.
The following is an interview that I was able to have with Yuji mainly about the M1 Endoskull kit, which was the base for the Animatronic Bust.
You can see how vast his knowledge is, not just about collectible toys, but also about movie props as well.

T-STUDIO
This “moving Terminator” was built based on the kit sold by M1.
Activate the Animatronic Bust ………
Yuji
This is great. Wait… was there a groove in the middle of the neck like this in the original kit?
T-STUDIO
There was in the prop in the first movie. For some reason it got omitted in T2.
Yuji
You’ve really done thorough research.
T-STUDIO
It is my faith to go beyond just making the model move, and make it as faithful as possible to the original movie prop.
Yuji
The vacuum metalizing looks great as well; fans worldwide would love this.
T-STUDIO
Thank you for the compliment. Nothing would make me happier than to receive praise by you.
So… starting off, I’d like to know a lot about the M1 Endoskull kit. This kit has been discontinued and has become a “legendary” kit.
Yuji
It goes a while back, but I’ll do my best to trace my memory.
T-STUDIO
OK, first tell me about how this project started.
Yuji
I believe I started this project in 1992. It took me about a year to launch the kit. When I visited Bob Burns, the famous collector in LA, I had the opportunity to go to his house and actually see firsthand the Endoskulls and Endoskeleton parts and replicas that he had collected. I thought to myself, “I want to create replicas like these”. After that, a friend of mine in the United States brought an opportunity for me to purchase a resin replica of an Endoskull, so I bought it at around $500 and started studying it. Then, there was another offer, which was more “underground”, to buy some other replicas, so I purchase a few and sold them at some shows in Japan. The problem with these replicas was the quality; the lines were not straight, contraction seen in the silicon, and the resin mold finish was poor in quality. They weren’t something that you could use as a prototype.
T-STUDIO
Because they are just replicas after all.
Yuji
Exactly. So, once I was granted permission to produce a product in Japan, I started looking for something that was good enough to become the prototype for my replica more seriously. When I visited the US again, they were having a props and paraphernalia show, and there they also had an auction going on as well. There I was able to win a bid for a T2 prop of an arm with a black glove smashed in a machine. There, I met Jeff, who works for James Cameron. He also played a role in the movie as a kid at the game arcade telling the T-1000 where John is. I told him about my desire to come up with an Endoskull model kit in Japan, and he said he could get me a high-quality original model from Stan Winston. Later, I visited the James Cameron office in Santa Monica to pick the model up. They showed me around the office, handed me the model, and let me take some pictures of the Endoskeleton that they had there. 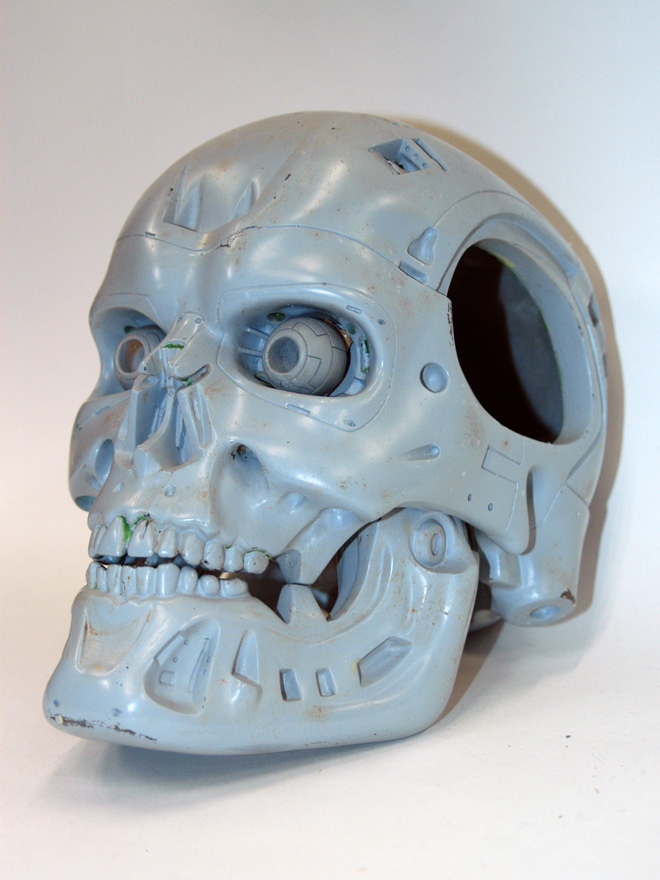 T-STUDIO
Were you able to meet James as well?
Yuji
Unfortunately not, he was out of office. But I asked if I could get James to write a recommendation to print on the kit box, and they replied that it was probably doable. So now I had my original model, and was able to move forward to design the replica kit.
T-STUDIO
Tell me more about that original model.
Yuji
It was an Endoskull from the 1st movie, the lines were straight, the size and quality was good, but because it was a prop, there wasn’t much attention paid to details. The edges lacked sharpness, there were brush lines left from the original clay molds…
T-STUDIO
So you finished off the details to make your prototype?
Yuji
Right. I created a mold out of the model I received from Stan Winston, finished off the details to give it a sharper look. For the mechanics on the side of the head, I searched for the Japanese plastic model that they actually used for the movie prop, and used the exact same thing to produce my replica.
T-STUDIO
So you were able to make your model look sharp because you redesigned the whole thing.
Yuji
Seiji Takahashi did a great job working on this original mold. The metal parts that come with the model were produced by a precision machine factory in my hometown Fukushima, but that really cost a lot.
T-STUDIO
When you had Seiji refine Stan’s mold, what did you ask him to do?
Yuji
I told him to straighten out the lines and sharpen the edges on the mechanics, but don’t lay a finger on anything else. It’s a replica of a movie prop, so I wanted it to be as close as possible to Stan’s original model. I heard that Stan had mentioned the original model that I had received was taken from a mold that he thought was in the best condition out of any other. 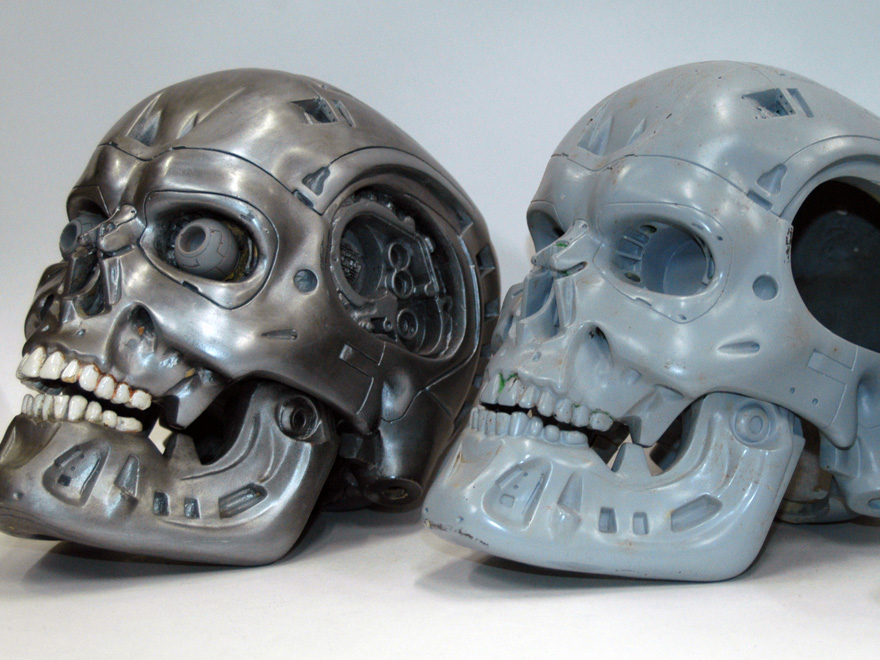 (image 02)From left, the original model received from Stan Winston, the final casting

T-STUDIO
So this is the final casting after all the fixes (image 01). This is just simply beautiful. If the Terminator had really existed, I guess it would look as sharp and beautiful as this…
Yuji
Yes, it could have.
T-STUDIO
So once you released your replica kit, did they go to James and Stan as well?
Yuji
Yes they did. I sent them both the kit and a fully painted and assembled one. I was relieved when I heard they were both very happy.
T-STUDIO
There are numerous manufacturers domestic and abroad who sell chrome plated Endoskulls today. Do you have anything to say about this?
Yuji
Those are fully assembled versus ours a model kit. So there’s a difference in the meaning of existence of the two, thus I don’t think the two are to be compared. But the lines in those products are not straight, which catches my eye. Our product has its lines straightened out, but because of the characteristics of soft vinyl, it is slightly smaller than the original model, which is a bummer. Oh, by the way, the internal mechanics design on the side of the Endoskull sold by Icons, they copied our model without getting our consent.
T-STUDIO
Lastly, I am going to be the first to announce to the world a “functioning Terminator” based on your meticulously designed kit. Can I get your comment on this Animatronic Bust ?
Yuji
I am very surprised by the quality. The sound of the motor is very similar to the movie prop I own that has the gimmick which enables the eyes to move, which gives it unique characteristic. I can see Terminator fans crying from delight.
T-STUDIO
That’s quite a compliment. Thank you very much for your time today.