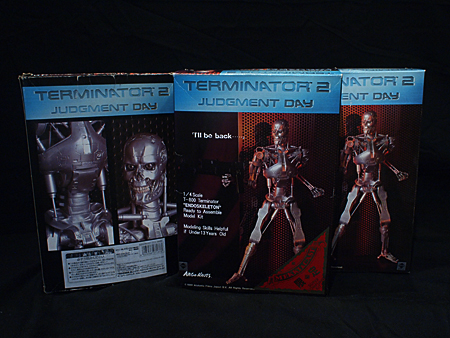 The below is what the actual designer of this model had commented in a book called “SUPER MOVIE TOY”.

It was originally planned to be a 1:6 scale model, but I proposed to change it to a 1:4 scale so that we could design it more accurately. In order to design an accurate model, we needed to see the real thing. So we decided to go to Stan Winston’s studio in LA without making any appointments! But back then, it wasn’t normal for a garage kit manufacturer to show up and interview design studios, so it took us three days to get someone to meet us. They were first dubious about us of course, but once they saw our partly-made Endoskeleton, they were surprised to see someone so crazy to create a model like this at a 1:4 scale, and they allowed us to do almost anything we wanted to do, from taking pictures to taking measurements. That’s why I strongly believe that this model kit is by far the most accurate model out there besides replicas, although the thigh is actually made longer at a 1:3 scale. The full scale model is designed to match Schwarzenegger’s physical form, so the legs are made short…. Our model is based off of the 1:3 scale model that they used for the stop motion filming, which looks more balanced.

Someday I’d like to mount the animatronics technology to this model kit as well. I currently own around ten sets of this kit, like I do for the M1 Endoskull kit.